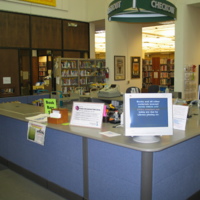 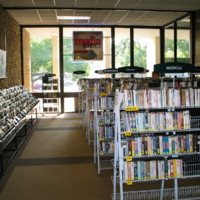 The quick growth of the library collection and services in the 1980s meant that by the end of the decade, space was again running out. But not to fear; this is what the designers of the building had anticipated and prepared for in 1972, when they left a space for a basement to be built some time in the future.

So in 1990, the library hired the architecture firm John Lee & Associates to design a new basement.  They received a $50,000 grant from the Kansas State Library towards the project, which totaled $300,000. 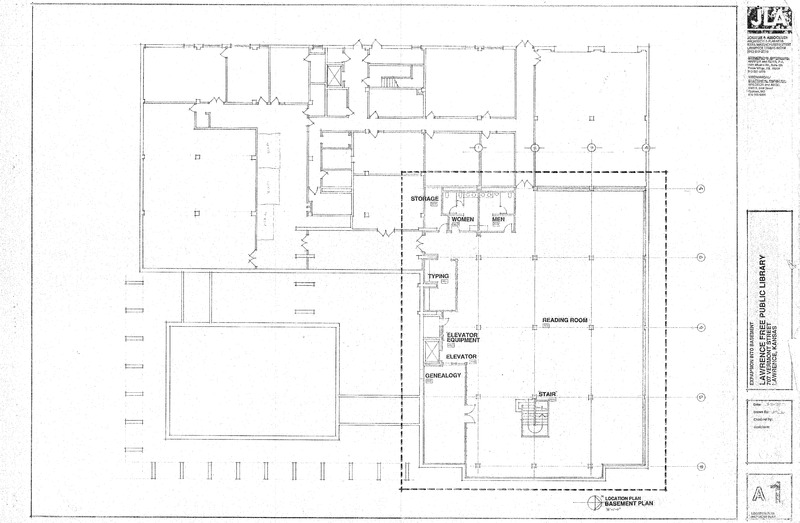 The basement addition opened in 1991,

allowing more space for the adult collection upstairs without sacrificing seating.  Other important additions were a larger typing room, a new geneaology room, and a dedicated storage room.

With the new space and conveniences, library director Wayne Mayo made many plans for the improvement of the library.  Seeing the early rise of digitization in the world of information, he hoped to digitize books, set up a computerized card catalog, and expand the video collection.  In 1994, the library included $50,000 for an online catalog in its 1995 budget request.  But alas all these things were put on hold when

at the age of 63.  He had been at the head of the library for 31 years.  Since his tenure began in 1963, the library had gone through innumerable changes, most notably the transition from the Carnegie building to its new location.  On May 24, 1994, the library closed for a memorial service in the auditorium, where they commemorated the life of a man who had meant everything to the library.

It took six months to find a new library director.  But in November 1994, Bruce Flanders, formerly director of technology for the Kansas State Library, was hired to head the Lawrence Public Library. 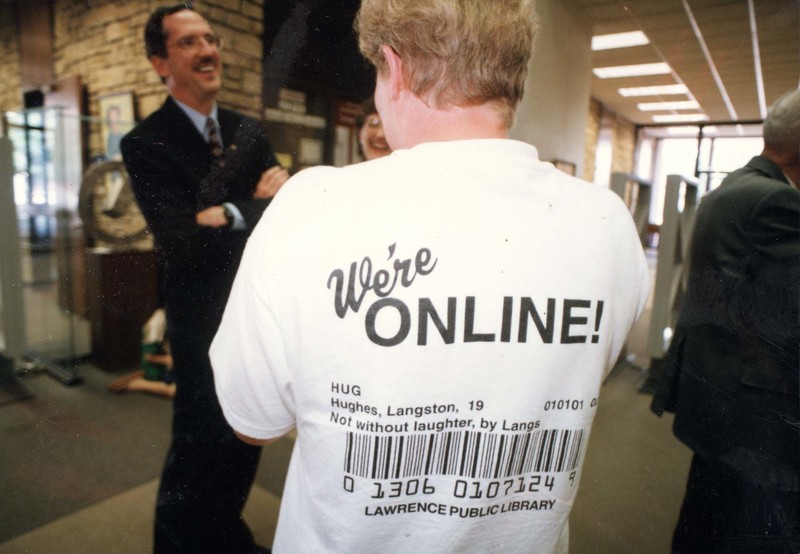 Taken at the launching of the online catalog in 1996.  Library director Bruce Flanders laughs in the background

As director, Bruce Flanders continued to push the library toward the new technologies emerging in the 90s.

In 1995, the library received the funding for a new digital catalog,

which would greatly improve the library experience of searching for books and materials.  In her oral history, Sherri Turner recalls the limitations of the old card catalog:

One of the titles I remember that was really popular right after I started was The Hunt for Red October, and it was—I think it was Tom Clancy’s first book, but it was such a rage. But when people came in, they didn’t remember his name because he wasn’t a big name yet, and it was amazing how many of them wanted to look for the book called ‘The Search for Red October.’ Well, until we got it in our heads that when people were looking for that, the actual title was The Hunt for Red October, it was unfindable, because they didn’t know the author and they didn’t have the right first word of the title.

Such things would no longer be an issue with a digital catalog; keyword searches would make finding even a portion of a title easy.  So to the delight of library patrons, the new catalog launched in 1996.

The library continued to include new technologies in its range of services.  Music CDs were added to the collection; DVDs replaced videocassettes.  More and more computers were made available; finally in 2009, a computer lab opened.  This was, more than ever, a digital library.