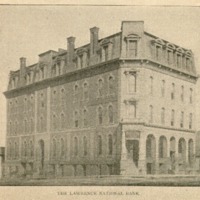 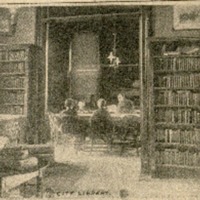 Now under control of the city, the Lawrence City Library continued to run on subscriptions, though the reading room was opened for free public use.  Yet the problem remained that the reading room was far too small for all the people who wanted to visit it and all the things they wanted to see in there. So in August 1873, the library moved to 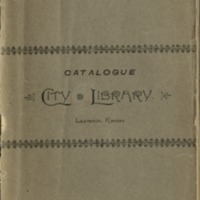 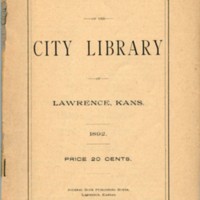 With so many subscriptions and proceeds from popular lectures, the library quickly grew into and then out of its quarters. A catalog published in 1892 shows over 8000 volumes in the library collection. Not surprisingly, three rooms in the first floor of the National Bank building would not cut it.

Cue Peter Emery to save the day, specifically to get 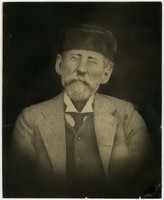 Peter Emery, in a maginificent hat

Mr. Emery (pictured here in a magnificent hat) had gotten wind of the efforts of Andrew Carnegie – yes the Andrew Carnegie, legendary steel magnate – who was giving grants to cities all over Kansas to construct buildings for libraries.

Receiving a Carnegie grant for a city library was surprisingly easy, as long as the city agreed to two conditions:

1. The library would be entirely free to the public

2. The city would set aside 10% of the original grant amount in its yearly budget for funding the library.

In retrospect, this sounds like an easy decision – who would turn down free money? And yet consider, the Carnegie Grant Lawrence would eventually receive was $27,500, meaning that $2,750 of the city budget (10% of the original grant) automatically had to be allocated to the library. Some in Lawrence rightly expressed reservations about accepting a grant under these conditions – and indeed many cities throughout Kansas either refused a grant offer or failed to meet its conditions after receiving the funds. But not Lawrence. 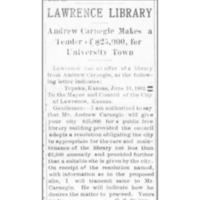 Lawrence was dedicated to its library

Peter Emery enlisted the help of US representative J.D. Bowersock – yes the Bowersock, local legend of Bowersock mills – and spearheaded a campaign to secure a Carnegie grant for the Lawrence City Library and then to get Lawrence to accept it.

On June 21, 1902, Carnegie made the official offer of $25,000 for construction of a new library. In 1903, the city voted to accept the grant and meet its conditions, including making the library a free public institution. At this time, a Library Board of Directors was formed to oversee library affairs and get to work on the glorious new Carnegie building.