Lillian Constant, like Blackbeard's gold, is a forgotten treasure.  The led the library through some of Lawrence's most challenging times and, throughout it all, remained endlessly committed to serving its citizens.  Much less is left of her than should be, and we're all the worse off for it.

She was hired at the Lawrence Public Library as Assistant Librarian

in 1919.  A year later, the head librarian Virgina Edwards—who had replaced Nellie Beatty—became seriously ill and died.  Lillian handled masterfully the sudden and unexpected responsibility thrust upon her, and led the library with diligence and grace. 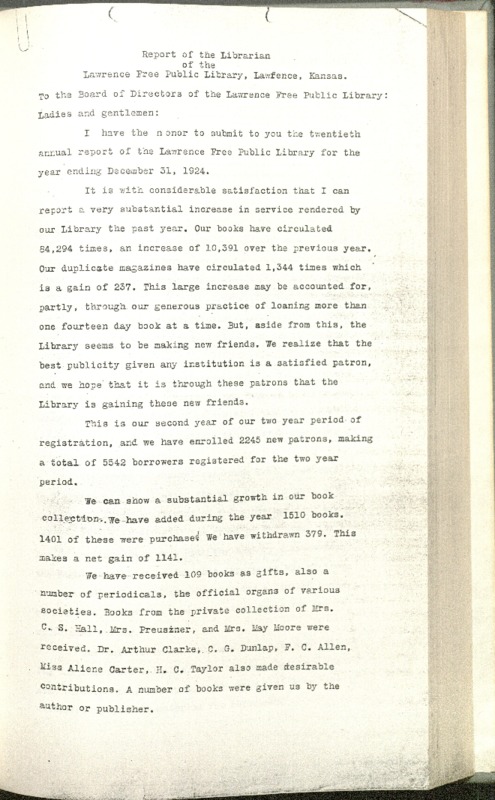 As head librarian, she believed deeply in the power of education

And she was always gratified when the library proved itself a place for the education and growth of the public.  In her 1924 Annual Report, she wrote

It is with considerable satisfaction that I can report a very substantial increase in services rendered by our Library the past year.

She coupled this intense dedication to education and knowledge with a friendly, lighthearted nature and jaunty sense of humor.  Her annual reports are a delight to read, peppered with tongue-in-cheek references and playful asides.

Miss Constant understood well the different roles the library played for its patrons, that for some it was a place of information and research but for others, it was a welcome companion when there was no other.  In her last annual report in 1946, she wrote of the University of Kansas students,

Some students are sent in by their instructors and some wander in a bit lonely and in search of some fiction to help them forget their loneliness. Almost without exception they have been an agreeable, very appreciative group of young people with whom it is a joy to work.

True to her name, Lillian remained constant to the library to the end.

the longest librarian's tenure in the history of library up to that point. On May 8, 1947, the Lawrence Outlook reported, “She has been in poor health for some time but trouble with her eyes is the immediate cause of her resignation.”

And so at the age of 75, Lillian Constant left the library she loved so much, after devotedly serving countless Lawrence citizens:

Through her efficient and understanding service Miss Constant has made her work in the community count for much. Thousands of school children and university students as well as the ordinary citizens have found her always ready and willing to help with the search for material on countless questions. She has kept the best in current literature available for the reading public.

Initially she went to stay with her brother in Oklahoma City. Then she moved to Topeka, where she died in 1952, only five years after leaving the library. She's buried in the Mount Hope Cemetery in Topeka. 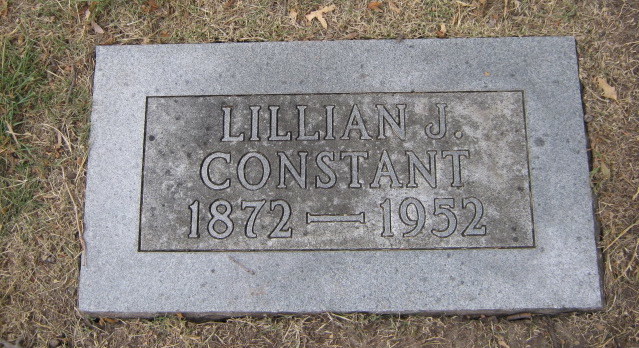