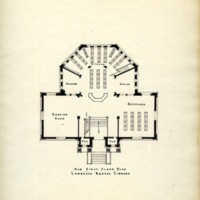 In memory of her late husband, Mrs. Chas. Grosvenor donated land on 9th and Vermont for the construction of the new building.  Architect George A. Berlinghof of Beatrice, Nebraska was chosen to design it.  He modeled the design after the Carnegie library in Beatrice.  In fact, the two libraries looked so similar that the Lawrence City Library pictured in the 1902 Handbook of Kansas Libraries is actually the Beatrice Library—probably because the Carnegie library in Lawrence wasn't built yet.

Early in 1903, a bill was passed in Topeka to place the Lawrence City Library under the new state library law.  This was necessary for the library to receive the funds from Carnegie, which had recently arrived in Topeka. 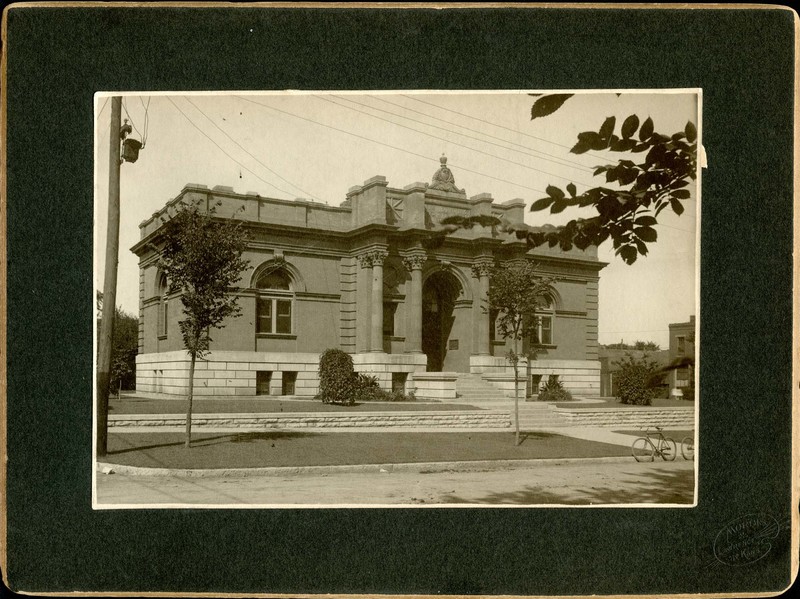 After the land was secured and the building's design approved, the library board elected Geo. A. Shaul as contractor for the project.  Construction started early in 1904; it took longer and cost more than initially anticipated.  But after an additional grant from Carnegie for $2,500 (making for a grand total of $27,500), the new library building was ready in December.

And so the Carnegie Library opened in December 26, 1904.  As the story goes, a snowstorm  blanketed Lawrence on the eve of the library opening, and yet Lawrencians flocked downtown on the evening of December 26 to walk the brand new floors and peruse the brand new shelves of their brand new library.

Under the unfailing guidance of its head librarian Nellie Griswold Beatty, the library slowly but surely found its footing.  For the first few years, recovering from the costs of the building and transition, the library had to rely heavily on donor contributions for furnishings and additions to the collection.

In early 1905, the board of directors appealed to the citizens of Lawrence for contributions to the library. And Lawrencians responded—as always—with unwavering support.  In her Annual Report for 1905, head librarian Nellie G. Beatty wrote, "This year has been a remarkable one for gifts received."

Notable is a grandfather clock still in the library given by Sara T.D. Robinson in honor of her husband Gov. Charles P. Robinson and her dear friend former librarian Helen Griswold Banks.

It was around this time when the Lawrence Free Public Library had one of its most illustrious patrons: 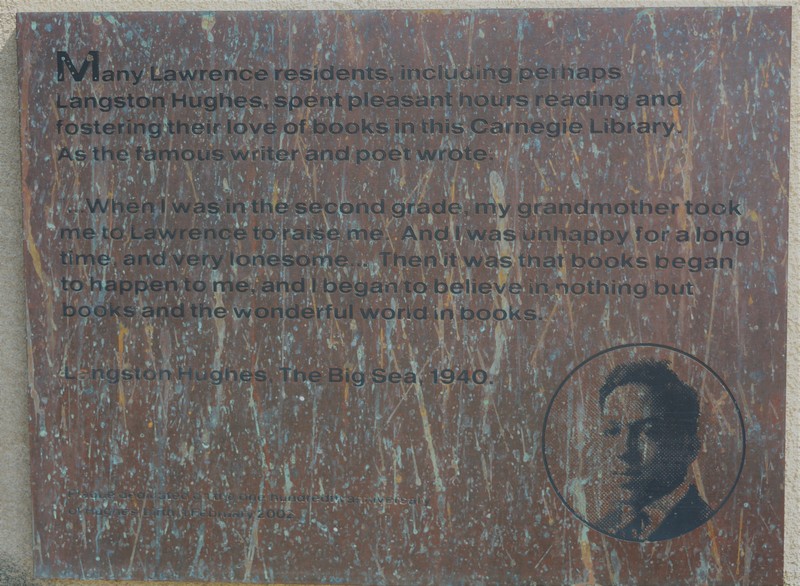 As all Lawrencians—and few outside Lawrence—know, spent much of his childhood in Lawrence, and it is more than likely that during the course of that time, he often frequented the Lawrence Public Library.

In his autobiography, he writes,

When I was in second grade, my granmother took me to Lawrence to raise me. And I was unhappy for a long time, and very lonesome, living with my granmother. Then it was that books began to happen to me, and I began to believe in nothing but books—where if people suffered, they suffered in beautiful language, not in monosyllables, as we did in Kansas.1

It is likely that Hughes found these books at the library, but he found more than books. He writes about visiting the Topeka library at a young age,

The silence inside the library, the big chairs, and long tables, and the fact that the library was always there and didn't seem to have a mortgage on it, or any sort of insecurity about it—all of that made me love it.2

Although he never makes a specific mention of the Lawrence Free Public Library, his image of a library as a secure place without a mortgage is significant. Throughout his time in Lawrence, Langston Hughes and his grandmother lived in constant fear of defaulting on the mortgage on her house: "We were never quite sure the white mortgage man was not going to take the house."3

Hughes's depiction of libraries suggests that in the midst of the insecurity in which he and his grandmother lived, the solid, welcoming edifice of Lawrence Free Public Library proved a haven of peace and refuge, just as it has to countless others who followed.