It was 1966, and the library was once again out of space

The previous year, the State Library had conducted a survey to determine the needs of the library and suggest solutions based on accepted standards of library service. They concluded that, though the library’s collection was of “excellent quality,” “the building was totally inadequate for a city the size of Lawrence and recommended that a new building be erected.”

Despite its desperate need, however, the library would have to wait 6 more years for a new building, containing as best as it could the overflowing tide of new books and services. 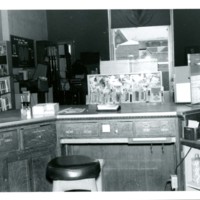 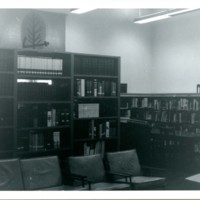 By 1969, the acute need of space could no longer be deferred. The library had added as much additional shelving as the space would allow, making the walkways tragically narrow and difficult to weave through. This shelving came at the cost of seating; an estimated 100 people visited the library each hour but there was only seating for 29. The shelves held the maximum weight of books that the 65-year-old foundation could support. After 1969, less circulated books had to be boxed and transported to the nearby water plant for storage. 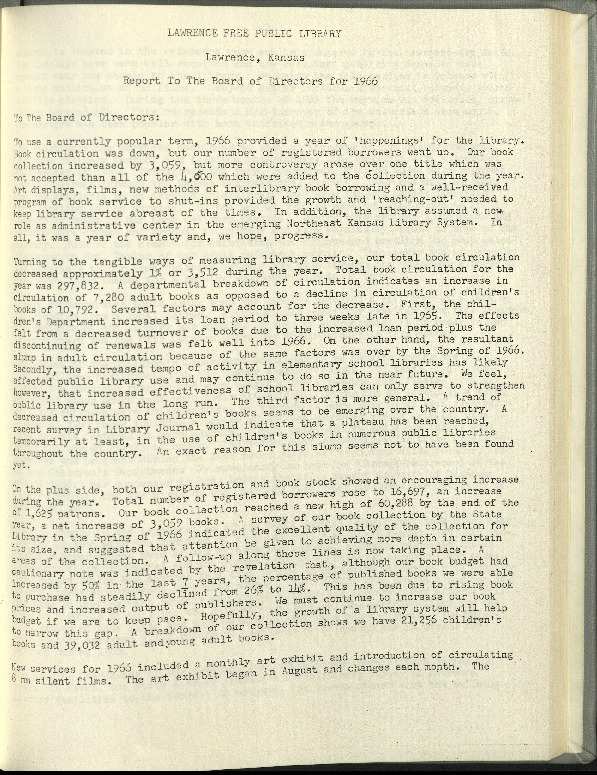 The problems were not only of space but of upkeep

The basement flooded with every heavy rainfall, damaging the floor and threatening damage to the books kept there. Problems came from above as well as below. In 1966, Wayne Mayo wrote,

The increased cost of maintenance of the 63 year old building was illustrated when the book collection became endangered as a result of numerous leaks in the roof. The city has since installed a new roof, but threats of leakage at other areas as well as inadequate electrical and heating capacity continue to be a problem.

Even more dire, the library’s circulation rates went into decline in the late 60’s. Wayne Mayo noted it to be a trend nationwide but also attributed part of the Lawrence Public Library’s particular problem to its cramped quarters, discouraging patrons from spending any significant time within its walls: “Who can deny the feeling of claustrophobia one receives after spending over 10 minutes in any part of the building?”

And set the date for a citywide vote on a $1,575,000 bond issue to provide funds. On March 3, 1970, the people of Lawrence would decide on the value the Lawrence Public Library had in their community. 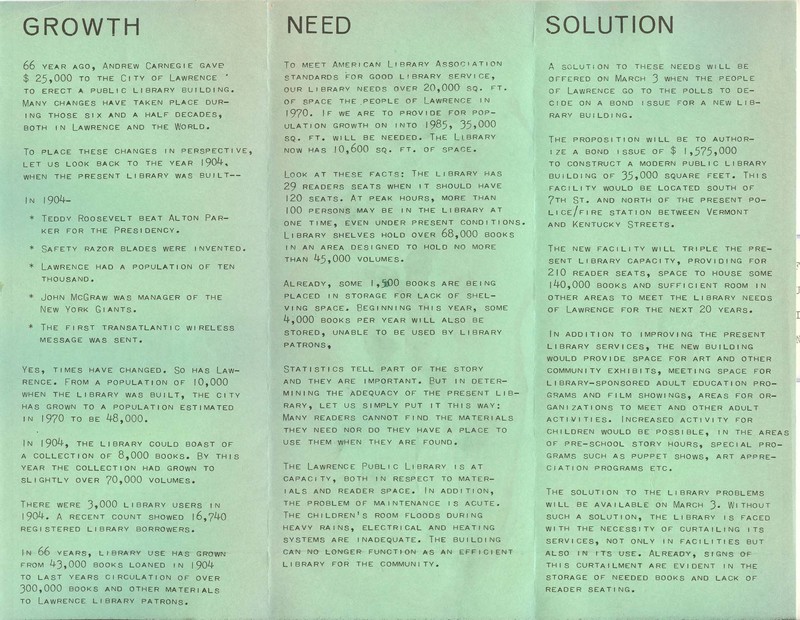 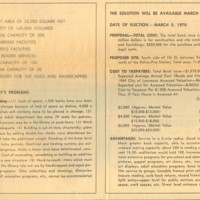 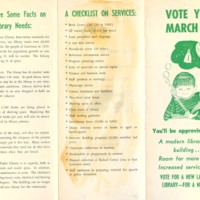 And so the campaigning began

The library created ads, brochures, flyers, mailers, posters, bookmarks, and all sorts of other materials to tell the people of Lawrence of the need for a new building.  Many of the ads emphasized the dramatic changes Lawrence and the country had gone through since 1904, when the Carnegie was built, in order to illustrate how inadequate the building was to serve the current population.

In 66 years, library use has grown from 43,000 books loaned in 1904 to last year's circulation of over 300,000 books and other materials to Lawrence Library patrons. 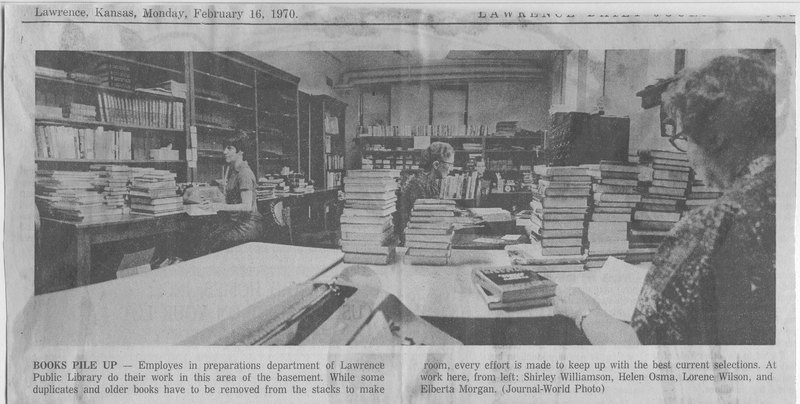 In addition to ads, the library enlisted the help of local newspapers to write features about the overcrowding in the library.  Pictures showed cramped, claustrophobic quarters overflowing with books and papers.

Articles told a bleak story of the tragically old building,

The deteriorating facilities, the floor quite literally sagging under the weight of library books and patrons.

In the narrative for the new library campaign, the Carnegie building was cast as hopelessly antiquated, a relic of the past.  Ironically, the very features that made the expanded Carnegie a marvel in 1937—The furnace! The basement! The high ceilings!—only served to brand it as utterly obsolete in 1970. The library of this time was eager to leave behind its past in the historic building and follow the lure of the glittering futre.

Odd as it might seem, knowing the value of library's history, this modernist stance struck the right tone for the people of the 70s.  Movements in architecture and other fields emphasized leaving behind the past to move toward the future, embracing wholeheartedly new styles and technologies. 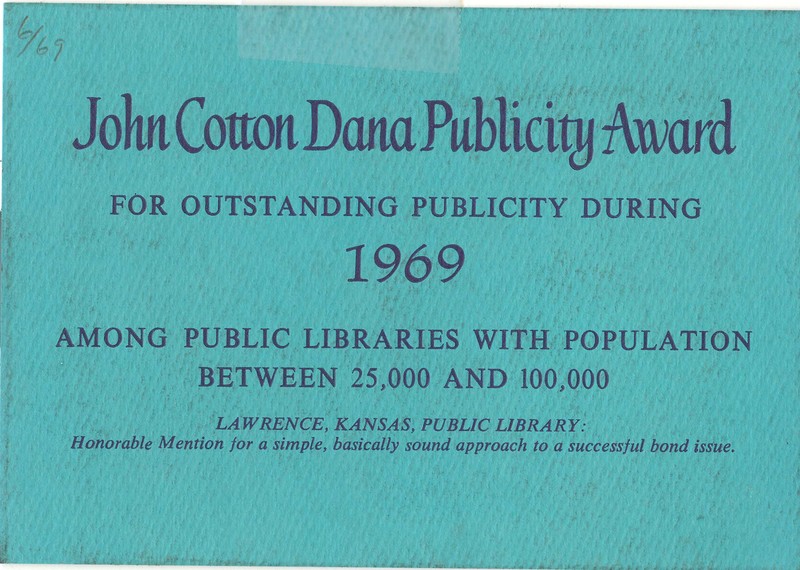 The new building campaign was so successful that in 1969, the library won a John Cotton Dana publicity award.  Lawrence was one of 10 libraries nationwide to win.  And the new library campaign proved indeed awardworthy.  Consider that 1969 saw a slowing of the American economy that recalled the bleak times of the Great Depression and would presage the recession in 1973.  Convincing people to spend $1.5 million dollars on a public building at this time was no mean feat.

Lawrencians voted in overwhelming support of the bond issue,

showing the commitment and dedication to their library that the city of Lawrence has been known for since its humble beginnings.  In his 1970 annual report, Wayne Mayo wrote,

In spite of the economic slowdown which began in 1969, the bond issue passed by a margin of 56%. A key factor in its passage was the excellent work done by the Bond Campaing Committee. Another important factor, I feel, was the general recognition by the voters of the educational role played to this library in the community over the past 60-odd years.

The library was to have a new building