Now we arrive at the true beginning,

as promised, in 1865, when J.S. Boughton purchased $150 dollars worth of books and decided to open a circulating library in Hartman’s building (what is now 733 Massachusetts Street). On April 2, The Daily Kansas Tribune announced the opening of Boughton's circulating library that evening.

"It will be a worthy enterprise," the article said, "and should receive the encouragement and support of every good citizen." 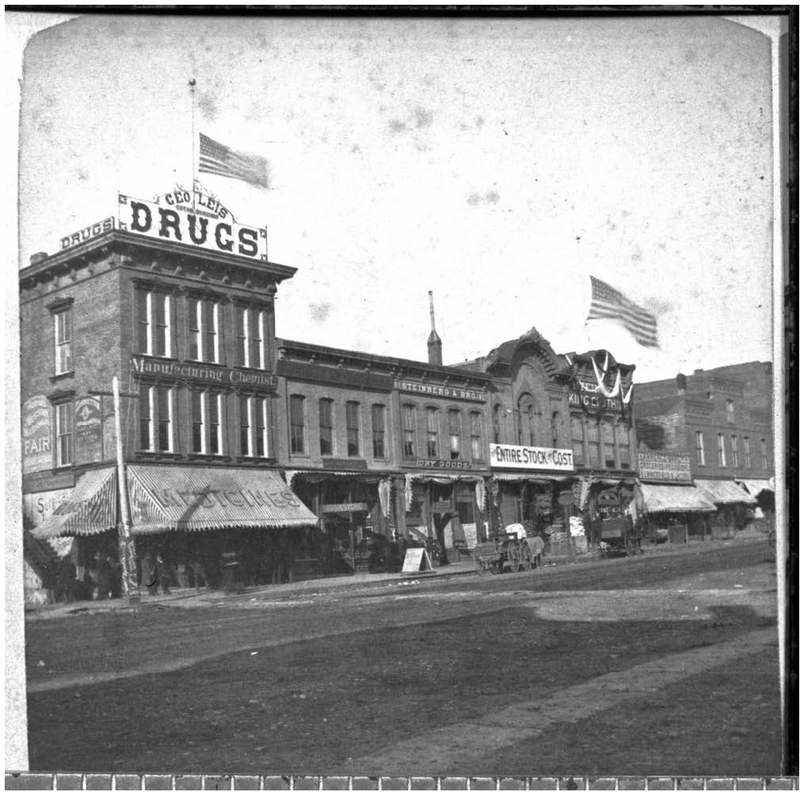 And inded it was a worthy enterprise. Boughton lent books at 10¢ a week or 15¢ for two weeks, and for any who cared not to pay per book, he offered annual tickets for $5 and lifetime memberships for $25.

The venture proved immensely popular, and in December of that same year, Boughton moved his little library to roomier quarters on the second floor over the George Leis Drugstore (pictured here in 1890 at what is now 644 Massachusetts Street), which allowed him to open a reading room adjacent to the library.

Boughton loved his library and the people of Lawrence loved it even more.  Reportedly, the library often closed its doors on empty bookshelves, which tells us 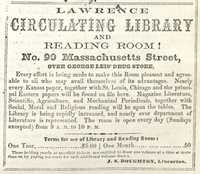 1. Lawrencians were avid, enthusiastic readers, eager to borrow any book they could get their hands on (the selection at Boughton's library cannot have been wide), as long as it gave them a chance to spend some time with the written word.

2. J.S. Boughton was vastly underequipped to singlehandedly meet the reading needs of this bookthirsty hoarde.

Boughton knew this all too well, and during the course of the year that the library was under his sole management, he tried several times without success to organize a library association to undertake the work of the library.

Finally in 1866, less than a year after opening his library, Boughton succeeded...

And the Lawrence Library Association was born.