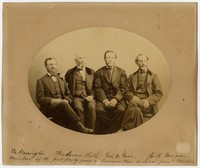 Members of the first party going to Lawrence in 1854.  Two of these men, Dr. Harrington (far left) and Ferdinand Fuller (next to him) would go on to become members of Lawrence's first literary society and library.

The Lawrence Public Library (and its previous versions) has been continuously active in Lawrence since 1865.  And yet the story of the library in Lawrence goes even further back, to the very founding of the scrappy little town in 1854.  Few realize this, but once they do, it makes a lot of sense: that an institution of literacy and learning would be embedded into Lawrence's DNA from the beginning.

And so we’ll begin where Lawrence began, with the first settlers gathered in a pioneer’s tent in 1854.  It was here that

The Kansas Atheneum was founded...

On October 13, 1854, the newly-arrived settlers of Lawrence assembled in the tent of J.S. Emery (pictured below) and A.A. Hanscom for “the organization of a society which shall eventuate in a Literary Association for weekly lectures, discussions and essays, and for the procuring a library.” 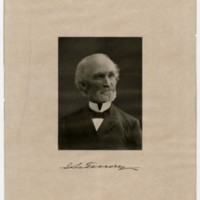 The association would meet regularly for lectures and debates—many of which centered on the growing conflict between the Southern and Northern states.

Not surprisingly, the high-minded, passionately abolitionist New Englanders who founded Lawrence eagerly embraced this new literary society.  Here was encapsulated all the ideals they hoped to implant in their new home.  Lawrence was the thinker's frontier town.

According to the minutes of the Kansas Atheneum, twenty-five men signed the constitution and by-laws at the first official meeting of the association, held October 24 in the Pioneer Boarding Hall. By January of the next year, membership had more than doubled. 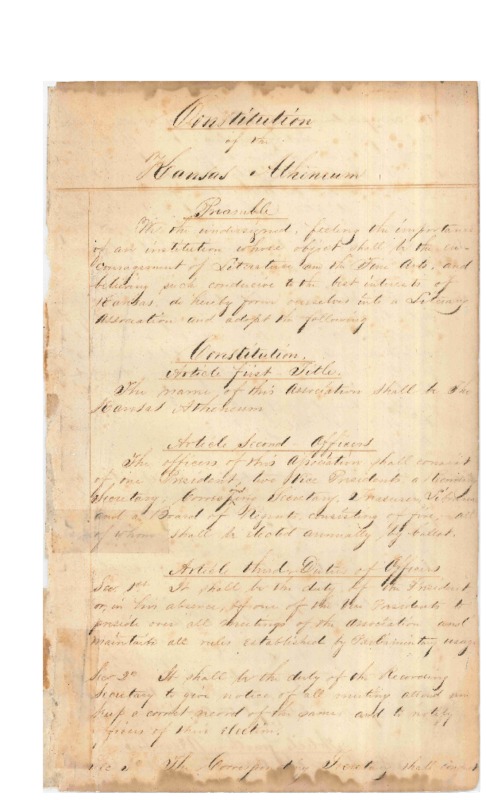 Constitution and By-Laws of the Kansas Atheneum 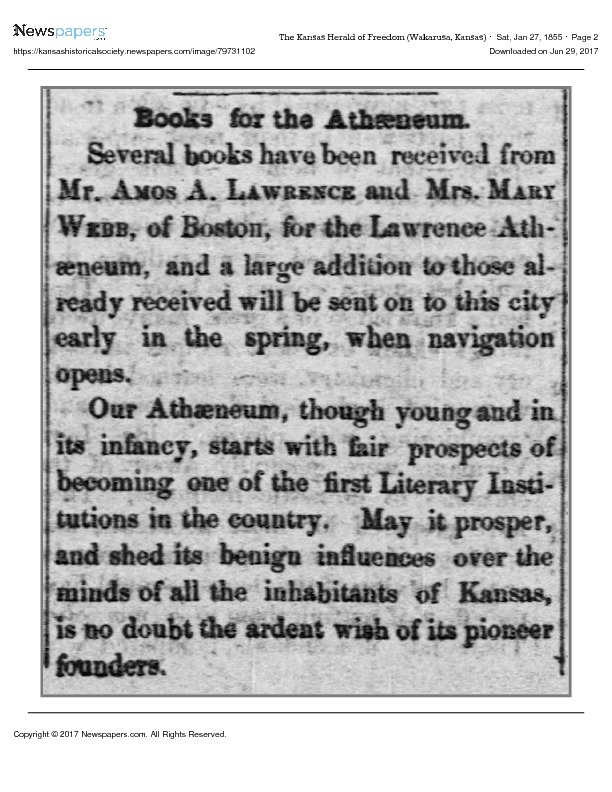 In addition to regular meetings

The association also maintained a library and reading room...

with many books donated, notably, by Amos A. Lawrence, after whom the town was named, and Mary Webb of Boston.  According to the by-laws of the association, the library was open on Tuesdays and Saturdays from 1 to 2 pm for borrowing books, while the reading room was “lighted from the usual time of lighting until nine o’clock each evening in the week.”

There's no way of knowing how much circulation this early library had, but the fact that opening a library was such an early priority and its reading room was open for so many hours a week is a fair indication that the library of the Kansas Atheneum was quite popular among early Lawrence settlers.

in the years leading up to the Civil War was not the best place for high-minded bookish men to be high-minded and bookish. Passionately anti-slavery men from the North were flocking to Kansas to ensure it would be a Free State.  Equally passionate pro-slavery men were doing their utmost to prevent it.

The members of the Atheneum knew quite well of the conflict surrounding them, and in 1856 the conflict in Lawrence came to a head, with Sheriff Jones’s Sacking of Lawrence on May 21.

Sheriff Jones, a rabid defender of Southern rights, and a band of Border Ruffians—men from Missouri intent on causing mischief in Kansas—descended upon Lawrence to burn down the Free State Hotel and tear down the printing presses of the Kansas Herald of Freedom.  And, of course, raid the town.

Losses for Lawrence were heavy. A history of Lawrence reports, "It was estimated that the value of the property destroyed and stolen amounted to nearly $200,000."1 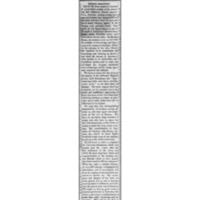 The end of the Kansas Atheneum

followed soon after, though we don't know exactly when. There is no record in the surviving minutes of the Kansas Atheneum of their very last meeting and the reasons why they disbanded, although one can imagine.

In 1856, a reporter at The Herald of Freedom reflected,

Would it not be well to reorganize the Lawrence Atheneum, which we formed here the winter after the first settlement of the town, and which the more important duties and responsibilities of the exciting contest through which we have passed, has alone caused to fall into abeyance?

Although the association had stopped meeting by this time, its library remained, “quite a valuable Library, of over 500 volumes, belonging to the association, and if resuscitated, will form the nucleus of an institution second to no similar one.”

What this reporter could not have possibly known, however, is that “the excitement and dangers of war” had not, in fact, passed from Lawrence at all, and as the city remained under attack, the Kansas Atheneum never reorganized.

It is likely its valuable book collection was destroyed during one of the raids that continued to plague Lawrence during the Civil War struggle, perhaps even Quantrill’s Raid in 1863, which laid utter waste to homes, possessions, and lives alike.  And while the town recovered determinedly quickly after the terrible massacre and destruction Quantrill and his men wreaked, it would take two years for Lawrence’s spirit to return and its inner bookishness to reassert itself.

It was 1865 when a new library cropped up, this time to stay.

1A History of Lawrence, Kansas by Richard Cordley, 1895